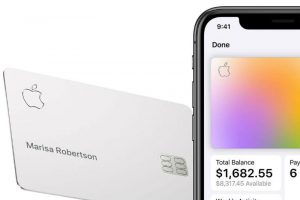 The hotly anticipated credit card by Apple and Goldman Sachs is days away from launch but those who planned to use it to gamble or buy bitcoin or other cryptocurrencies just got some very bad news.

Goldman published on Friday the credit card customer agreement that lists the restrictions on transactions that have been described as “cash advance and cash equivalents”, and those include the purchase of cryptocurrency, casino gambling, and betting, among others.

News about the American tech giant teaming up with Goldman to issue a credit card first emerged in March. It has since become known that interest rates for Apple Card are in the range of 13.24% to 24.24%, based on users’ creditworthiness.

Gambling and Cryptocurrency Restrictions
As mentioned earlier, under the Apple Card customer agreement (PDF), those who opt for both the physical or digital version of the card will not be able to buy cryptocurrency or to gamble, among other things.

The recently published agreement reads that cash advance and cash equivalents, that is to say “cash advance and other cash-like transaction, including purchases of cash equivalents such as travelers checks, foreign currency, or cryptocurrency; money orders; peer to peer transfers, wire transfers or similar cash-like transactions; lottery tickets, casino gaming chips (whether physical or digital), or race track wagers or similar betting transactions,” will not be possible.

The launch of Apple Card is part of Apple’s broader strategy to diversify its revenue sources after years of heavily relying on iPhone sales. As for Goldman, the partnership with the tech giant is part of the investment bank’s long-time effort to establish a consumer-focused business.

Apple’s new credit card is slated to begin rolling out within the next few days or weeks, as confirmed by the company’s CEO, Tim Cook, during its quarterly earnings call.

Crackdown on Credit Card Gambling
Apple’s announcement that customers would not be able to make gambling-related purchases with its card came as the latest bad news for those who use their credit cards to make casino deposits or for wagering purposes.

Last month, Australian bank Macquarie announced that it has banned gambling- and lottery-related transactions on credit cards, citing growing regulatory pressure within the nation’s gambling industry as the reason for its decision. The bank also raised concerns that gambling addicts have easy access to credit, which can intensify their problem.

The New Zealand Department of Internal Affairs, which among other things is tasked with overseeing the country’s gambling industry, said last week that it has been mulling a ban on credit card gambling.

In the UK, the Gambling Commission said late last month that it would hold a twelve-week consultation, starting mid-August, to determine whether a ban on gambling online with credit cards should be introduced. Reports about gambling regulators and lawmakers considering the possibility to ban gambling-related credit card transactions have been floating around in the country for at least several months.