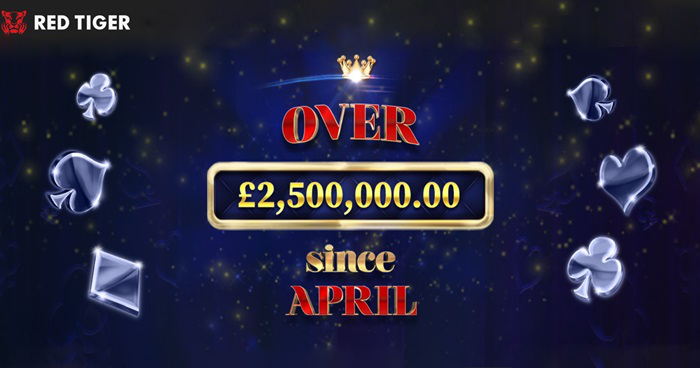 In just four months since its launch, Red Tiger’s Daily Drop Jackpot Network has paid out over £2.5m making it the Maltese firm’s fastest-growing jackpot product.

According to the official press release…

…the network-wide jackpots, are available to any brand with a Malta license, have had unprecedented success with the industry’s top brands and their millions of players.

“the product is an exciting addition to our portfolio“

Last month, one lucky UK Betsafe player (Betsafe is one of Swedish online gambling company Betsson AB’s brands) was the recipient of the Daily Drop Jackpot Network’s biggest ever daily prize, winning £61,500 from a £2 stake on the classic hit slot Dragon’s Luck.

The wildly-popular jackpot product is now available across all of the casino games development company’s titles and to all sized operators and player types, which gives everyone the opportunity to win and promote some of the industry’s biggest prizes.

“The Daily Drop Jackpot Network has truly caught the imagination of the players and we’re absolutely delighted with its performance since we went live earlier this year.

“The product is an exciting addition to our portfolio and we’re confident that it will keep growing into a must-have product.”

“At Betsson we’re thrilled with how well the Daily Drop Jackpot Network has performed since we joined in July.

“It was fantastic to see one of our players win a record daily jackpot of £61,500 from a £2 bet on Betsafe, and the feedback we’ve had from other customers shows how excited players are when offered big jackpots guaranteed to pay out every day.”

Augmented by the liquidity of top operators such as Norwegian sports betting company, Gaming Innovation Group (GiG); Betsson and Paddy Power Betfair, the Daily Drop Jackpot Network promises to pay out a jackpot each and every day, according to Red Tiger’s official press release.

In other company news, leading UK sportsbook Betfred recently went live with slots from the software provider. Courtesy of the content supply agreement penned in late July, the operator‘s customers now have access to all of the supplier’s back catalog, including favorite titles such as Mystery Reels, Rainbow Jackpots and Red Tiger’s latest blockbuster, Pirates’ Plenty, which was released on February 28 this year.